The Irish version of the American breakfast sandwich, for hurried people on the go. 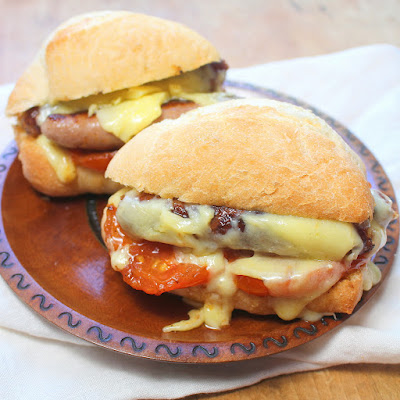 A breakfast roll typically consists of a bread roll containing one or more fillings from an Ulster fry, which usually has things such as Irish banger sausage, Irish bacon, Irish cheddar cheese, white or black pudding, sauteed mushrooms, briefly fried tomato slices and tomato sauce (ketchup) or brown sauce  (Branston brown sauce or the American version of that would be A-1 steak sauce)
In some cases a hash brown or fried egg can be added.

I used banger sausages, Irish Skellig cheese (a sweet type of cheddar) and fried tomatoes, with a drizzle of brown sauce. The tomatoes can make it quite juicy, so as a quick breakfast for the car, isn't the best idea, but the flavor is great. Simpler rolls with just meat and cheese might be a better choice  while shipping late-risers off to school. I also used a drizzle of A-1, which is almost identical to Branston brown sauce.
A note on the bangers, they are not seasoned the same way as American breakfast sausages. And  among banger, the British  versions contain ginger whereas the Irish ones do not, but otherwise very close.
And  the bacon  is not quite the same as American smoked bacon either. American bacon comes from pork belly and has a higher ratio of fat. As well, Irish bacon is not usually smoked. The best approximation in the US for Irish bacon would possibly be Canadian bacon, very lean.
Everyone will do what they need to do to get the roll  made, but authentic would use Irish bangers or Irish bacon.

Ingredients made with any combination of fillings: